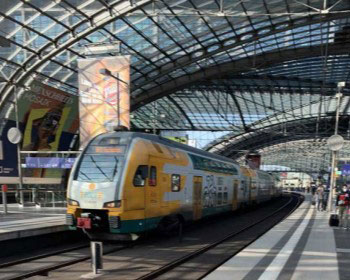 Anyone who travels a lot by train in eastern Germany or commutes a lot from work will also sometimes or regularly sit in the ODEG (eastern german train). As a traveler or commuter, you also carry all kinds of electrical devices that need to be charged. You might need it when you want to show your digital ticket and the battery has run out. Or if you simply want to bridge the travel time with a game because the train was late again.

Some people also want to work with their notebook or laptop during the journey and need electricity for these devices on the ODEG train (Regional Express). Therefore the question arises, where to find the sockets in the trains of the ODEG (Ostdeutsche Eisenbahngesellschaft).

The following picture shows the respective Regional Express of the ODEG.

Those who ride in it will find the socket by the quad seats. There, the socket is mounted on the waste garbage can under the small table by the window. There is one socket on each side of the waste garbage can. According to the signage, no more than 150W of power should be plugged in, which should be perfectly adequate for most devices, after all, you don’t want to be blow-drying your hair on the train.

So if you need an electric power connection in the ODEG or in the Regional-Express (RE), you should sit down at these seats.